Two weeks ago in canning class we canned Oregon Albacore Tuna. I got to take home one jar, as per usual. ONE JAR – that’s not going to get me through the winter! So it was time for a quest. Mama’s in town so I conned her into helping me process a bunch of tuna. We went to Newport and got three 20 pound fishies! 60 glorious pounds of Albacore Tuna. After filleting that worked out to about 34 pounds of meat.

Here we go! Bringing home the tuna from the Chelsea Rose. 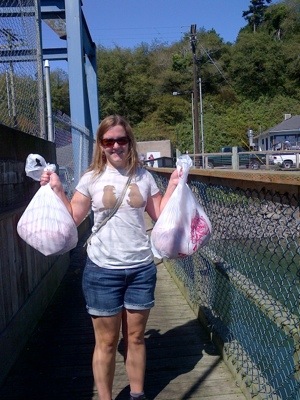 The first thing we did was can as much as we could fit in my pressure canner – 24 half pints. Tuna needs to be pressure canned for 100 minutes, so you definitely want to do a full load. We filled the jars with raw tuna leaving about an inch head space. You can precook it first if you want, but that just seems silly when it cans for so long. Do you want your house to stink even more than it already will from the canning? 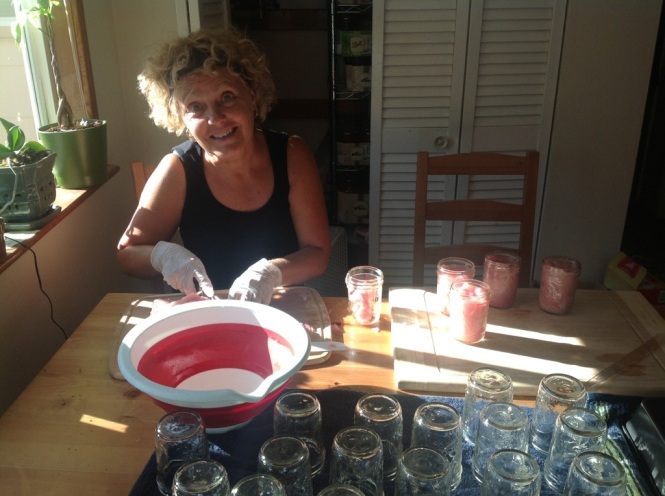 It’s probably a good idea to wear gloves. Stinky stinky tuna. Stuffing the jars kinda made me want to vomit all over them, so I had to stop for a drink and make mama do a lot more while I worked on wiping rims and putting on the lids.

When the jars are full you can add a little water if you want. We did in some of the jars but you don’t actually have to, just ensure you get as many of the air pockets out as possible.

When the jars are full and debubbled to the best of your ability wipe the rims and apply the warm lids. This rim wiping is not just the regular wipe though, those rims are nasty! Use vinegar and many paper towels to get the oils off so that they will seal.

Add 3 quarts of water to the canner. Load it up, 2 layers of 12 (in a 23 quart canner). When stacking, either place a tray between the layers or stack the top layer jars so they are each resting on the rims of two jars.

We did a second load in a 16 quart canner so used the wide mouth half pints so we could fit 16 – 8 per layer.

Close the lid. Turn the heat up to high and get the water boiling. Get a steady stream of steam venting and adjust the heat if necessary so it doesn’t get too vigourous. Vent for 10 minutes. After the 10 minutes of venting, place on the weight. Bring the canner to 11 pounds of pressure. Start the time when the pressure is reached. Watch carefully and maintain the pressure over 11 pounds for a full 100 minutes. REMEMBER if it drops below pressure for even a brief moment you MUST restart the time. So keep it over 11 – it sucks to have to start over. And test your pressure gauge every year! Yes I am yelling at you since this is my first pressure canning post and I want you to be safe. 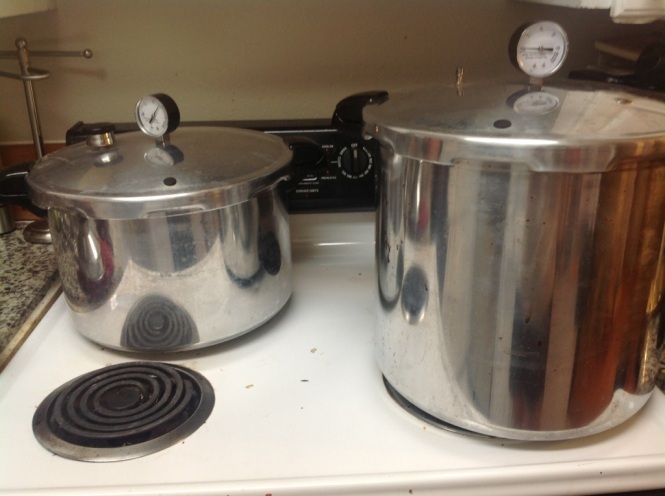 When the 100 minutes are up, turn off the heat and carefully remove the canner from the burner. Let the pressure drop completely on its own. After the little pressure button thing drops, remove the weight. Wait 10 more minutes, then remove the lid and the tuna jars. Listen to the PING PING PINGS!!!!

After 12-24 hours when the jars are cool, remove the bands, check the seals and rinse the jars. There is going to be some nasty residue from the little bits on the outside of the jar so use soap and water to clean the jars. I ended up just chucking the bands since they were so nasty. In other nasty news, I have now washed the towels that we used for this endeavor 5 times and they still stink of tuna, so don’t use your favourite towels. If any one has good suggestions on getting out the stench please let me know.

Label, store and enjoy all winter! I am really excited to eat it, I swear, it’s just kind of a gross process so one needs a break before one starts eating the tuna.

The tuna that was left after canning we froze in steaks. I think I will borrow my friends vacuum sealer to avoid freezer burn. Now we are set for winter! In terms of yield, it works out that you’ll need just over 10 pounds to fill 24 half pint jars. So we split this partially with a friend and froze just less than half of the tuna. Now go get some – once you do you’ll never go back to the 99 cent cans in the grocery store. 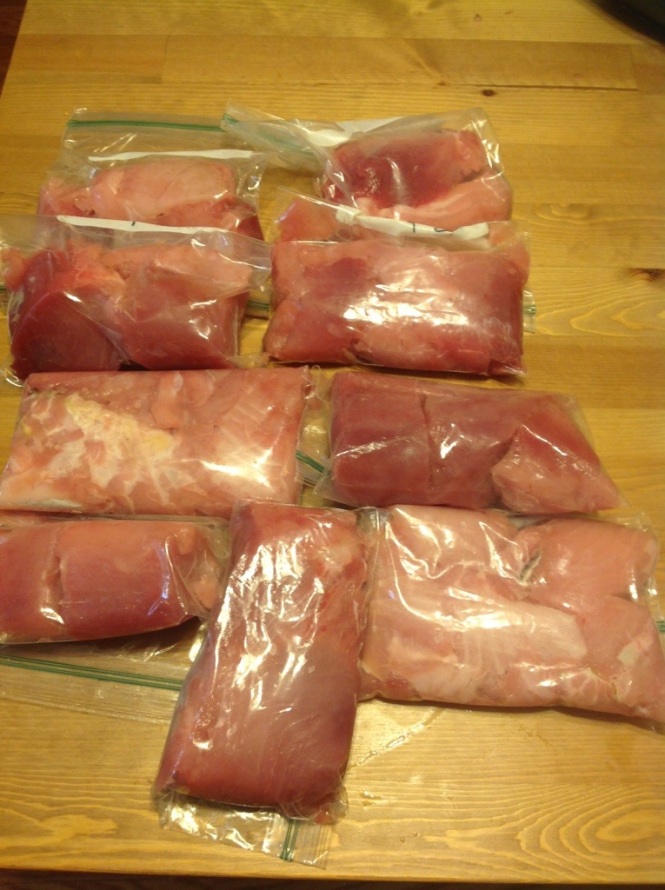 One thought on “Tuna Fest”