Last summer I grew pepper plants in pots instead of in the main garden. Of course, being who I am, I couldn’t just grow pepper plants, I had to turn it into an experiment. I had space for 6 pots along my fence and I had 12 pepper plants that I had started from seed. Plant 2 per pot you say? Nah, that’s too easy. I decided to instead do two pots with one plant each (a bell pepper and a jalapeno pepper), two pots with two peppers, and two pots with three peppers. All summer when I picked a pepper I kept a record of what plant it came from, and this is what I saw. 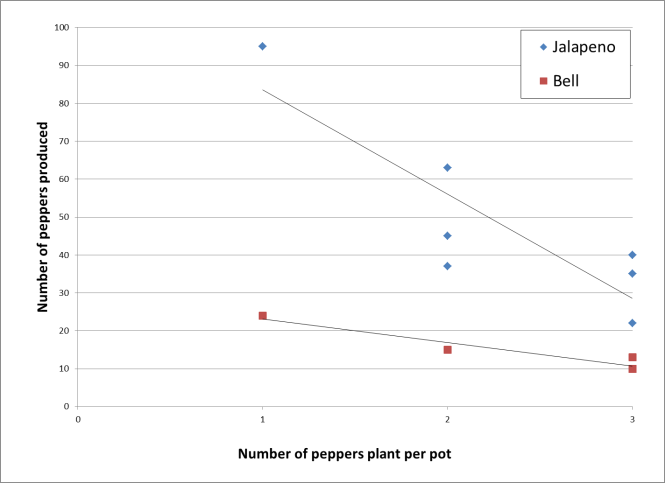 As you can see, it’s sort of what you would expect. I had the most peppers from the plants that were by themselves in a pot, and when more plants we together I got less and less pepper production. You can also see that it wasn’t a very well replicated or scientifically sound experiment, and I had more jalapeno plants than bell peppers, but I still found it interesting. The jalapeno all by itself produced almost 100 peppers, whereas the ones sharing produced almost half that! So it’s probably worthwhile to plant them alone and let them thrive. The bell pepper plants produced less, but still not 50% less so maybe it’s OK to plant two in a pot? Qualitatively though I could tell they weren’t happy with three in a pot. Some of the peppers had brown rotting spots on them, and they did not get as big. All in all it was a delicious experiment, and this year I’ve got some in the main garden, and some in pots.

Now get out there and plant some peppers!
Have you ever grown peppers in pots? How did they do?