I feel like beets are one of those things where either you love ’em or you hate ’em, and I definitely love ’em. So today I’d like to try and help you board the beet train; convince you to at least give the beets a chance! I think one reason that people are beetophobic is that they don’t know how to prepare them well. But never fear, the botanist is here! I have two favourite recipes I use when I make beets, and think you should try at least one of them before you write beets off for good. But first – some fun facts about beets!

When I think of beets I think of the red root vegetable pictured below, from my garden. The beet plant, Beta vulgaris, however, comes in a few other forms too. Golden beets, and sugar beets, are different cultivars of the same species, as is chard. Sugar beets are grown to make sugar (hence the name), just as sugar cane is, because they contain a high concentration of sucrose. 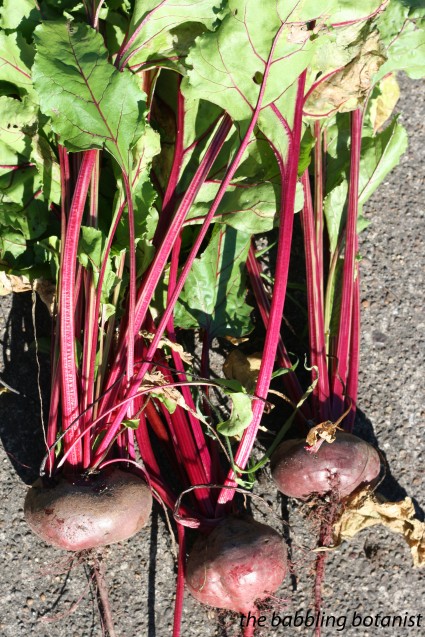 Beets are awesome for a number of reasons. For one, they do well in most climates because they like cool weather, but will also still grow in the summer. I never seem to get them in the garden as soon as I could, and should have been able to harvest way more by now, because they can actually be seeded a month before the last expected frost date for your area. Then you can also get in another crop in the fall or grow them through the winter if you live far enough south.

Beets are also very versatile in how they can be prepared, and are highly nutritious. The website the world’s healthiest foods (click it for link) has some great nutritional info, so I’ll just send you there rather than plagiarize it. I love that both the root and the leaves of the plant are edible, and you can harvest up to a third of a beet’s greens without harming the root, if you want to harvest greens and leave the root to grow larger. Beetroot is delicious on salads, just shredded raw into thin strips, or the roots can also be cooked, which is how I usually eat them. When eating beets (or feeding them to others) it’s also important to remember that they can affect you, ahem… the next day. “Beeturia,” a reddening of the urine, is estimated to occur in 10-15% of people, according to that world’s healthiest foods site, although I think this is probably higher. And I think it reddens something else even more though… so I like to warn people who have never eaten beets before, because even for me who eats them all the time it can be a little startling when you get up in the morning to do your business and are still half asleep. No, you are probably not bleeding internally, you just ate beets yesterday!

OK, so now let’s talk now about my two favourite ways to prepare beets. Yep, going to do it right after the bathroom talk. Sorry, it was either discuss it before or after the recipe, so I went for before. Beets can be steamed or boiled, but my favorite method is to roast them, either in the oven, or most of the time I do it on the barbecue. Oh and don’t forget, they can also be pickled!

Step one for both these recipes is to rince the beets, cut off the tops and roots and peel them.

For recipe number 1, which we’ll call “Beet Treats,” because I think they taste like candy, I like to cube the beets. Then place them either on aluminum foil if you plan to grill them, or in an oven dish if you plan to do them in the oven. All I add is oil, vinegar and spices. For 2-3 medium beets I add a couple tablespoons of coconut oil (olive is great too) and a couple tablespoons of vinegar (I like balsamic or red wine vinegar). Then add salt, pepper, garlic powder, rosemary and oregano to taste. I usually also add a couple tablespoons of water too because the liquid can boil off. So watch them so they don’t burn and rotate them around a bit if they are more than a layer deep. Close the aluminum foil around them to keep the liquid in, and cover the pan with foil if you make this is the oven. 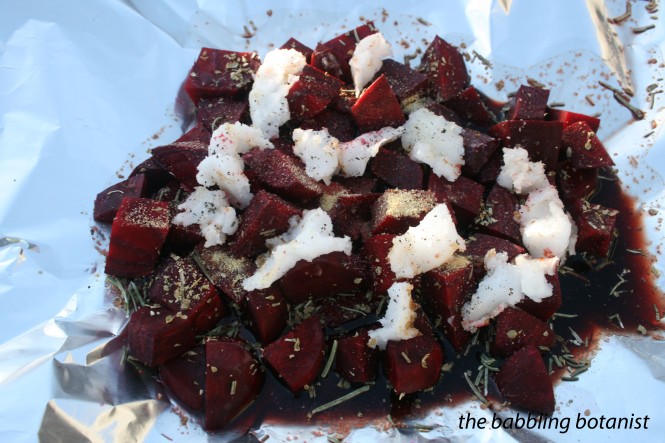 They take about a half hour or so on the grill to soften to perfection. Sometimes a little longer if they are multiple layers deep and larger pieces.

Recipe number 2 was inspired by The Flavor Bible, a book recently acquired by Kiki as a wedding present. We were purusing the bible for an unrelated topic, and were in the B section looking for an interesting flavour combination we could do for blueberry jam, when we stopped upon beets. Cheese was listed as an excellent flavour pairing for beets, something I don’t think I ever would have thought to try. So the next day I harvested some beets and tried them out with Parmesan cheese, and thus this recipe for “Beet Parmesan” was born. Oh. My. God. is this ever good. And I think it’s fitting to use the lord’s name here, as the bible helped me create this recipe. You could even call it divine.

So here it is! For this recipe I think it’s best to cut the beets into coins, thinly-ish but not too thin.

Drizzle aluminum foil with olive oil and place the beet coins on in a single layer. Sprinkle a little more oil on top, along with salt, pepper and garlic powder.

Roast the beets for 10 or so minutes, depending on how thin you cut them, and then flip. You can test for doneness by stabbing them careflly with a fork.

Roast them a few more minutes, and then when they are almost done, sprinkle on the Parmesan cheese. Close the lid of the grill and roast just long enough to melt the cheese.

Remove from the heat and gobble them up! Now to get across how delcious this recipe is, and how much you need to try it, here’s a little story of the aftermath of feeding these beets to the boy. Now he’s been complaining ever since I found my love for beets. I think the third time I ever served them, he said ” beets AGAIN,” but with this recipe the tides shifted. After dinner, he told me we needed to have a talk, and the talk was really a confession, a confession that he had enjoyed the beets! He was almost ashamed to admit it, being a classic beet hater, but as I looked at his plate I could see that while even a small piece of steak remained, every last beet was gone. So let this be a lesson to all you beet haters out there, give the beets another chance!

5 thoughts on “Beeeeets – some fun facts and two recipes”