Two great publications to refer to for tomato products are this USDA guide, and and PNW 300. Keep in mind that you can both raw and hot pack tomatoes, and that there are guidelines for both hot water bath canning them, or for pressure canning them. Hot packing and pressure canning will of course require the shortest processing time, whereas cold or raw packing and hot water bath canning takes the longest. For example, if you raw pack whole or halved tomatoes, they need to be water bath canned for 85 minutes! So you may want to consider cracking out the pressure canner for whole packs, as the processing time is only 25 minutes. Nice to have options though, isn’t it? This time, I did a hot pack of crushed tomatoes. Typically, this is how I use tomatoes anyways, so it’s the way I most commonly preserve them. It’s a shorter processing time than packing them whole, and produces a very nice product.

Here’s how its done! First I cored and blanched them.

Then threw them in cold water to cool them off. Peel and cut the tomatoes in quarters. If you are doing a big batch, check out this post by Erica, from Northwest Edible Life, one of my very favourite blogs. She shows her strategy for blanching and peeling large batches of tomatoes.

Mash about a quart or so of the tomatoes in a large pot and bring them to a boil. You want enough in there and mashed that you fill your pot 2-3 inches deep. Once at a boil, continue to add quartered tomatoes slowly to the pot, stirring frequently. After you have a good layer of crushed ones, just stir the rest in without crushing them. Wait until it returns to a boil, add more, and so on until all the tomatoes are in the pot. You’ll need about a pound or pound and a quarter per pint, so if you are aiming for a full 7 quart batch, you’ll want at least 14 pounds. The PNW publication says 2.75 pounds per quart, which might be a little bit high, but in the ballpark of 15 -18 pounds should equal a canner load. Meanwhile, prepare your canner, jars and lids. I think it’s worth it to do a full batch since the processing time will be 45 minutes. If you do a whole pack and an 85 minute processing time you had better be doing a full load or you’re just silly.

Once all the tomatoes are added, maintain a boil for 5 minutes, then fill your hot jars. Make sure to acidify your tomatoes when filling the jars. This means adding either 1/2 tsp per quart of citric acid or 2 tbsp per quart of bottled lemon juice. I like to just add it to every jar first so that I don’t have a chance of forgetting. Remember that this is an important step because tomatoes are on the borderline of pH levels safe for hot water bath canning, so the extra touch of acid ensures that you will have a safe, botulism free product. Also as a note when filling jars. What I like to do is use a slotted spoon to get the crushed pieces that stayed more in tact, and fill jars first with those. But still make sure you have enough liquid in there so it’s still a good crushed tomato pack. Doing it this way I label my later jars as being more runny, and use them for purposes such as soup, and the others where I want more of a meaty product. If you have juice left over at the end, use this to make up some sauce or something. I threw my leftover juice in the freezer to use this weekend when I make a big batch of spaghetti sauce.

Place the jars in the hot water bath canner, covered by at least 2 inches of water, and bring to a full rolling boil. When processing for these long processing times, if your canner barely fits your jars you may need to add water part way through. Especially if you are doing 85 minutes, water will boil off. Bring some water to a boil on another burner and add it to your canner if too much water is boiling off. Alternatively, pressure can the tomatoes at 11 pounds of pressure (sea level) for 15 minutes (25 if doing a whole or half pack, or a raw pack). With venting for 10 minutes, bringing the canner up to pressure, and waiting for the pressure to return to zero, it probably doesn’t actually save a ton of time, but there still could be an argument made for pressure canning being easier. I think I will try to pressure can some whole ones shortly and let you know how it goes. After 45 minutes, turn off the heat, remove the canner lid, wait 5 minutes and remove the jars to a hot pad or towel. Cool 12-24 hours, remove bands, check seals, label and store. 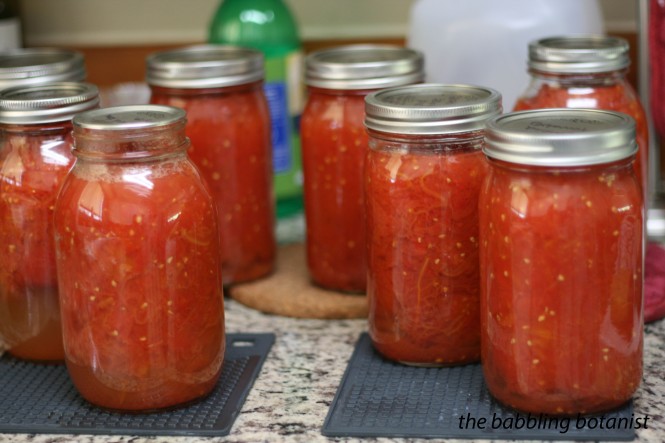 Sometimes you can get a little separation occurring in your jars like in the image below. This isn’t something you need to worry about though, it’s just because the tomatoes were boiling in the jar so the solids were pushed up to the top. Once the jar is completely cooled and you have checked the seal, give it a little shake and mix the liquids and solids back together.

After a little shake it looks perfect. Label, store and enjoy all winter long. 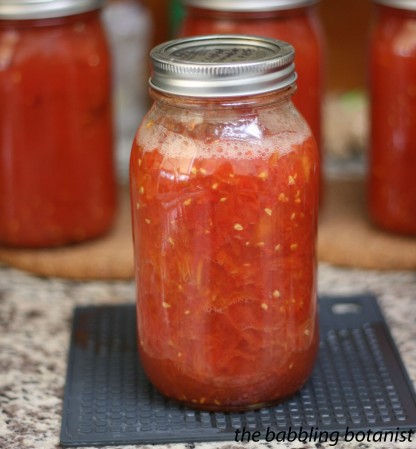