We officially had the first frost of the season, which means the bulk of the preservation season is over. I do still have some carrots, beets, and broccoli alive in the garden, but the tomatoes and peppers are toast. Sad, but luckily now we enter the phase of eating all these goodies which is also great! Being so busy this summer, I didn’t do nearly as much canning as last summer, but one thing that helped some with my time crunch was having a freezer this year. A chest freezer is really a great investment if you have the space, and I have not even noticed a change in the power bill. At this time of year it’s a great idea to go through your freezer, sort it, and determine what you have so that you ensure you actually eat those things throughout the winter. I just went through mine, so thought I’d give you a tour of it!

On the bottom here you can see that I had a very successful berry season. I tried to layer the bottom of the freezer with the berries, since I have so many, then have one of each bag more accessible, and I can grab another as needed.

On top of the berries I have some vegetables and meat that I froze this summer. Home grown broccoli vacuum sealed using my new food saver, corn from the local farm stand that I got when they were having an awesome sale, tomatoes from near the end of the season when they were growing slowly so I accumulate them until I have enough for some sauce, and some meats that I bought either on sale or in bulk from Costco. 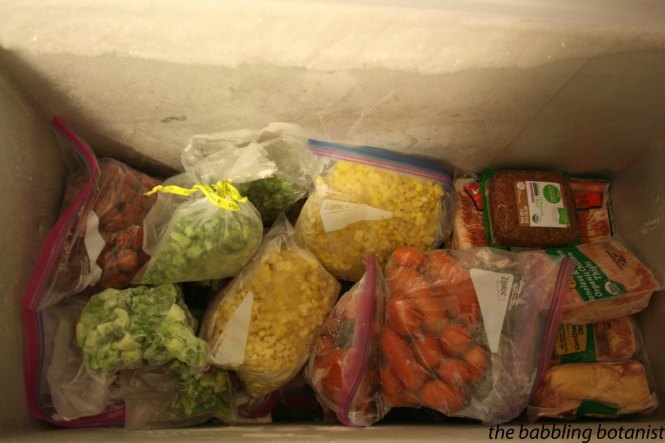 On the next layer we have in that bag a turkey carcass which I plan to take out when I have more time and make stock with, we also have some corn dogs (mostly the boy – but everyone can’t be perfect in what they have in the freezer right?) and in the basket some bread and the last bit of smoked salmon from this summer. 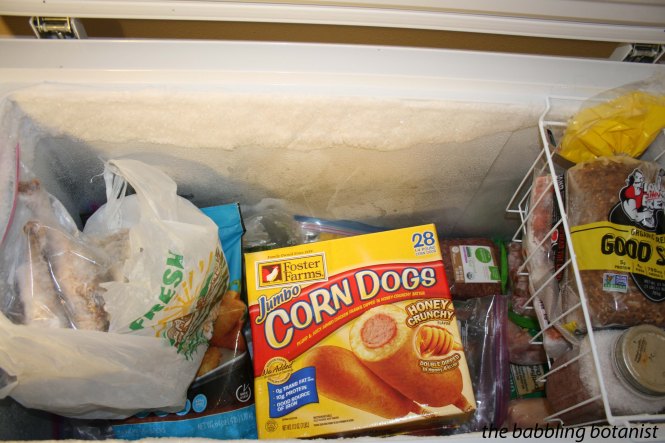 All in all I think I did pretty well on berries (more than enough probably!) but would have liked to freeze a little more in the way of veggies. I do have winter squash that I still plan to cook, puree and add to my freezer stash, and once that carcass is out I’ll have a little more room for that, but overall I think the season was a success – the freezer is nearly full after all. I did also eat some of the things I preserved earlier this season – as it should be! Now go check out you freezer, and don’t let that stuff in the bottom sit there for the rest of eternity – eat it!

What things do you like to preserve by freezing? How was your preservation season this year?